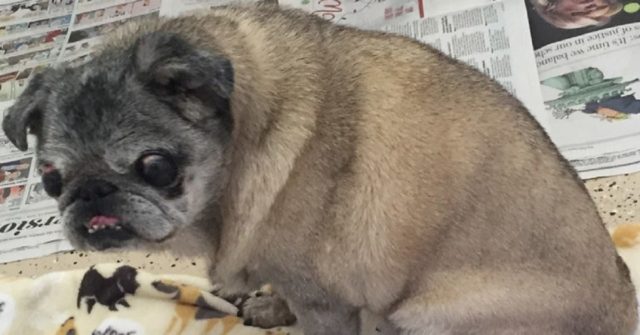 A woman in Ohio is facing three months of imprisonment after leaving a blind, deaf and neglected dog in Walmart’s parking lot. As reported by Fox8, the 15-year-old Pug was left in a box near a donation box.

Medina County Society for the Prevention of Cruelty to Animals took the dog in, and they discovered that besides hearing and visual disabilities, the dog is also suffering from infection on both ears.

One of her eyes is almost rupturing, and almost all her teeth are decayed. They took to Facebook to identify the person who abandoned her.

Rita Swartz, the 52-year-old dog owner, says that she tried looking for animal shelters that can keep her dog, but to no success. SPCA claims that Swartz did not try to reach out to them.

She was arrested and was charged a second-degree misdemeanor for abandoning animals. She is now asked to pay a fine of $750 and be in jail for 90 days.

SPCA, who named the rescued dog Agnes, treated her minor injuries. But then, she needs to undergo surgery for her rupturing eye and her teeth.

SPCA believes that she won’t be able to make it after such surgeries, so a foster family is needed to keep her during her last moments.

Pug Given A Loving Home

The foster family promised to help make her last few days pleasant for the dog. Agnes feels safer and comfortable now with her foster family assisting her around their home so she won’t accidentally trip over.

Now, the Pug has “a loving home and is part of a family,” the SPCA posted on Facebook. Although she still needs to take some medications daily and requires some assistance, she is living with a wonderful and loving family.

Swartz, the previous dog owner, faced a judge on January 30.