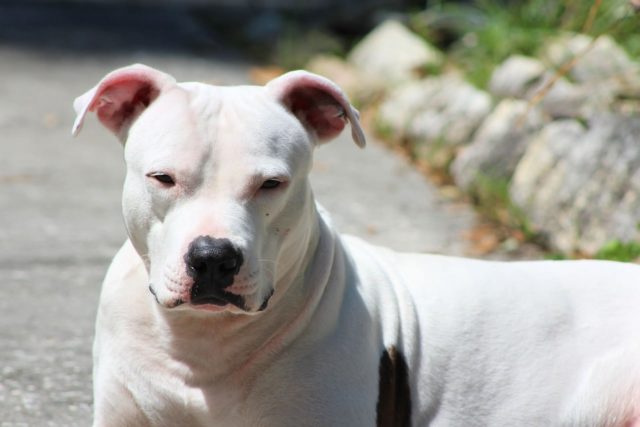 It was an ordinary February morning. Nate Ohlman was on route, working as a mail delivery man in Missouri.

Suddenly, he spotted an elderly dog at the end of the road. The poor pup was huddled up in the ditch, struggling to keep warm in the freezing weather.

The sight of the cold, lonely dog broke Nate’s heart. He knew he had to do something. Nate didn’t want to startle the dog, so he slowly tried to get near him.

It didn’t take long for him to realize that the poor dog could hardly see or hear him.

When the dog finally noticed Nate, he immediately bolted for his truck as if he already knew that the mailman would help him. According to Nate, the dog was starving and frostbitten, which means that he needs immediate medical attention.

So, Nate rushed the dog, who was later named Sloan, to the animal hospital nearby.

Nate dropped off the dog to the hospital, hoping that he will soon get better. He also gave his contact information to the hospital staff so that they could give him an update on the dog.

Then, Nate went on to continue with his work. However, he couldn’t get the thought of Sloan out of his mind.

After a day, Sloan was brought to the shelter of the KC Pet Project. His horrendous condition left everyone at the shelter heartbroken.

The shelter’s chief communications officer, Tori Fugate, said that Sloan’s body was covered with sores and was severely malnourished. He could also hardly walk or stand on his own.

Sloan got the lowest body score condition that the shelter’s vets could give. They immediately put the poor dog on medication and kept him under close supervision for several days.

Thankfully, Sloan’s condition eventually improved. His body got strong enough, and he was transferred to a foster home for him to continue his recovery.

Despite his old age of around 12 years, Sloan was able to heal. He transformed into the sweetest and goofiest dog who always wants to be around people.

Soon enough, Sloan was finally ready to move on to his forever family, and his friends at the shelter knew precisely who that is.

When Nate knew that he could officially adopt Sloan, he got ecstatic. The two of them had the sweetest reunion.

As soon as Sloan saw Nate, he immediately recognized him and gave him kisses and cuddles to thank him.

Now, Sloan is wonderfully settling into his new home.