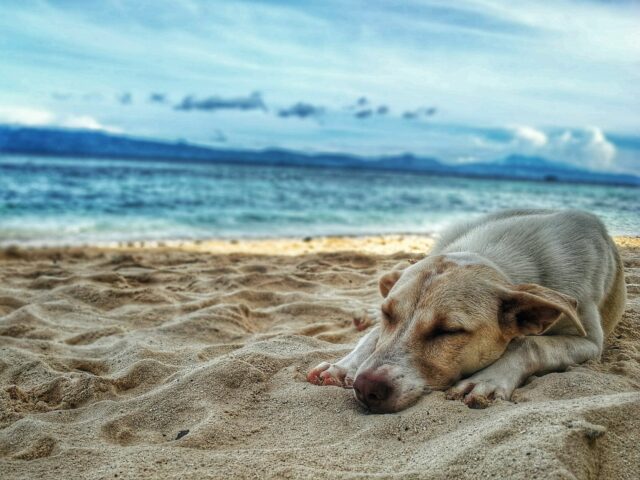 Famous for its fabulous beaches, delightful boating canals and historic riverfront, Fort Lauderdale is just 25 miles north of Miami, in the U.S. state of Florida.

With a population of around 180,000 inhabitants, it’s a bustling, thriving city, with lots of attractions and plenty of things to keep you entertained.

If you’re in the area with your canine companion, then you’ll be able to enjoy 2 dog beaches in Fort Lauderdale and several other dog beaches in the surrounding area.

This small, but beautifully formed, stretch of gorgeous sandy beach is 100 yards of paradise for your furry friend. The dog beach is located at 1269 North Fort Lauderdale Beach Boulevard and is just off Sunrise Boulevard, a short hop from the A1A highway.

Fort Lauderdale Dog Beach is an on-leash dog beach, so please make sure that your pup is kept on its leash at all times.

The beach facilities are basic but clean and well-maintained. You’ll find trash cans dotted around the beach, along with clean-up bags and plenty of water for your thirsty furball. There are also a handful of beach showers, making it quick and easy for both you and your dog to rinse yourselves off after playing in the sand!

A city officer is on hand at Fort Lauderdale Dog Beach to advise on and enforce the beach rules and to assist with any problems or issues that may arise.

A single-weekend permit for your dog currently costs $7.

The permits can be purchased from the Parks and Recreation Department at the Holiday Park Social Center. The center address is 1150 G. Harold Martin Drive, Fort Lauderdale, FL 33304.

Hollywood Dog Beach is located just 20 minutes south of Fort Lauderdale Dog Beach, and is just off the A1A highway.

Similarly to Canine Beach, the dog beach in Hollywood, Florida, is closed to canines Monday through Thursday. It’s open from 3pm to 7pm Friday, Saturday and Sunday. During Daylight Savings Time, the hours of operation change to 4pm to 8pm.

You need to purchase either a daily pass, or a 6-month pass, to be able to take your dog on to the dog beach. For Hollywood residents, the daily pass is $5 per dog. For non-resident visitors, the cost rises to $10 per dog.

If you’re going to be in the area for a longer period of time, then the 6-month pass is excellent value for money. It’s $30 per dog for Hollywood residents and $60 per dog for non-residents.

The permits can be purchased on the dog beach itself, between Pershing Street and Custer Street, or at the administrative office, which is located at 1405 South 28th Avenue. Note that they do not accept cash or money orders – it’s credit card only, and you will also need to show some form of identification.

You’ll find Haulover Beach Park a little over 9 miles south of Hollywood Dog Beach, right next to the main A1A highway, in the northern reaches of Miami. The exact address is 10800 Collins Avenue, Miami Beach, Florida 33154.

Haulover Beach Park is in Miami-Dade County and is one of two public beach parks operated by the county.

There is a limit of 2 dogs per person and puppies under 6 months old are not permitted.

Haulover Beach Park also features a fabulous Bark Park, which is located near the south picnic area of the beach. The Bark Park is open 7 days a week, from 8am to sunset.

It features two separate enclosures, one for small dogs weighing less than 35 lbs, and one for larger dogs that weigh more than 35 lbs.

The Haulover Beach Bark Park entry fee is $2 per vehicle.

There is also a large open grass area for you and your furball to play fetch and other doggy games, or just freely run around to your heart’s content – and all off-leash.

Head north from Fort Lauderdale Dog Beach on the A1A highway and after a 40-minute drive, you’ll be at Bark Beach in Boca Raton.

This gorgeous stretch of Florida beach is open to dogs on Fridays, Saturdays and Sundays only. Doggy opening hours are between 7am and 9am in the morning and then from 3pm to sunset December through February and from 5pm to sunset March through November.

You’ll need a permit to enjoy Bark Beach with your pooch. As of September 8, 2021, a weekend pass is $11 per dog and there is a limit of 2 dogs per person. A weekend access pass covers the aforementioned doggy opening hours on Friday, Saturday and Sunday and is available to purchase at the Spanish River Park Gatehouse.

The current cost of an annual access permit is $31 per dog if you’re a resident and $167 per dog for non-residents.

Note that the Bark Beach rules state that all dogs must be on a leash prior to entering and upon departing the dog beach. Once you’re on the dog beach, though, it’s a leash-free area.

The location of this lovely little dog beach is 3001 North State Road A1A, Boca Raton, FL 33487. The dog friendly area is between lifeguard towers 18 and 20 and ONLY on the designated days and times.

Tigertail Lake Park is located just southwest of Fort Lauderdale International Airport, close to the intersection of the I-95 Express and Route 818.

According to the Performance Pups Inc. website, Tigertail Lake is “the cleanest freshwater dog lake in Broward County”.

For you and your pooch to get access to the delightful dog beach that surrounds the lake, an entry ticket will set you back $5.50. If you want dock access, it will cost you $7.55. Note that only dogs need a ticket to enter the lake – dog parents don’t need a ticket. These are admission prices for a single session.

If you know that you’ll be making lots of visits to Tigertail, then several different multiple entry passes are available. See the official website for details.

This is a fabulous place to take your dog, where it can safely run around off-leash and swim around as much as it likes in the wonderful freshwater lake!

Please note that only dogs can swim here – it’s forbidden for humans to swim at the park. Dog parents are allowed to walk and wade in the water, but not to swim.

The dog park is located on the south end of the lake, opposite the sailboats, and is accessible from Anglers Avenue. The park entrance is by the bus depot.

So what do YOU think? Which is YOUR favorite dog beach in Fort Lauderdale? Let us know by leaving a comment – we’d love to hear from you.

Things change all the time, so if any of the information in this article is incorrect or out-of-date, please let us know – just leave us a comment below. Many thanks!

Do I Need A Dog Beach Permit For Fort Lauderdale?

Yes, you need a permit to take your dog on to Fort Lauderdale Dog Beach (also known as Canine Beach). A single-weekend permit for your dog currently costs $7.

Where Can I Purchase A Permit For My Dog For Fort Lauderdale Dog Beach (Canine Beach)?

The permits can be purchased from the Parks and Recreation Department at the Holiday Park Social Center. The center address is 1150 G. Harold Martin Drive, Fort Lauderdale, FL 33304.

No, it isn’t. Fort Lauderdale Dog Beach (also known as Canine Beach) is an on-leash dog beach, so please make sure that your pup is kept on its leash at all times.

Yes, it is! Tigertail Lake Park is located just southwest of Fort Lauderdale International Airport. This is where you’ll find the Performance Pups Freshwater Dog Beach. Take a look at their website for full details.

Are There Any Other Dog Friendly Beaches Near Fort Lauderdale?

Other Similar Articles You May Enjoy