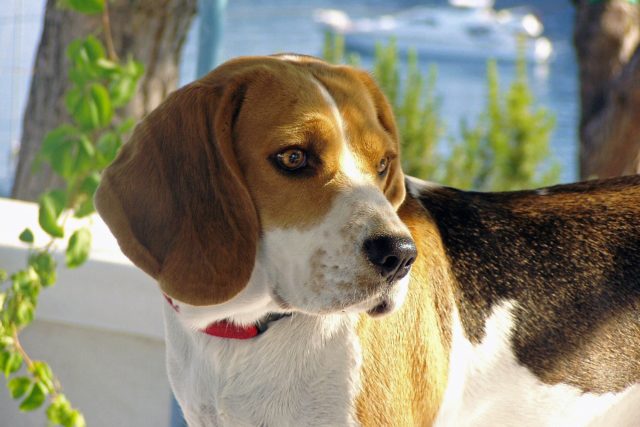 This amazing story is all about a dog rescue with a difference. Read on for details of a right royal rescue…

How Guy The Beagle Went From Death Row To Buckingham Palace

It’s not only Disney that make fairytales happen! When Prince Harry and Meghan Markle got married in May 2018, it was not just a fairytale wedding. It was also a fairytale ending for Guy the beagle.

This is the story of how Guy the beagle started a remarkable journey. A journey which took him from Death Row at a US dog shelter to a life at one of the UK royal palaces!

Guy owes his reprieve to the legions of Instagram fans, who posted about the poor guy’s fate on the hugely popular social media channel.

From Kentucky To Toronto

A Dog’s Dream Rescue, an organisation based in Ontario, rescues beagles that are due to be put to sleep in the United States and takes them to Canada to be adopted.

Guy the beagle had been found in a forest in Kentucky and was taken in by a local shelter.

Volunteers then drove Guy to the Canadian border, more than 500 miles away. From there, Guy was taken to an adoption event in the suburbs of Toronto.

Meghan Markle To The Rescue!

Meghan Markle, at the time a Toronto resident, was one of the people who attended the adoption event that day. She spent a while at the event and simply couldn’t resist Guy’s cute face!

Meghan signed the papers and ended up taking Guy back home from the event.

Dolores Doherty, who runs A Dog’s Dream Rescue, said that she was absolutely delighted that Guy would now be joining the UK royal family. “It’s simply beyond my wildest dreams,” she said.

In November 2017, it was confirmed by Prince Harry’s press office that Guy had moved to the UK and was back living with Meghan.

Having A Right Royal Time!

Although Guy the beagle is undoubtedly the most famous of Dolores’s rescue dogs, many of her others also have fantastic stories.

Over the course of 7 years, A Dog’s Dream Rescue has rescued over 1,600 dogs. A truly remarkable achievement in itself. Many now work in the medical industry, whilst others are working as detection dogs along the US-Canada border.

However, only 1 of them – Guy the beagle – has made it into the household of the UK royal family. And I’m sure that he’s having a right royal time of it in there!

Would you like to make your dog happier? Of course you would! Here are 17 easy ways to do just that

Find out here what Stella the dog received that made her go crazy!

Ever wanted to help your dog gain weight? Here’s how to do it in a safe way

Tim Weidow was relaxing with his family on their boat dock in Cape Coral, Florida. Find out what happened next……

Watch this amazing video of a dog rescued 135 miles out at sea!

Marty the rescue dog is at the New York Marathon. See what he does when the runners come past