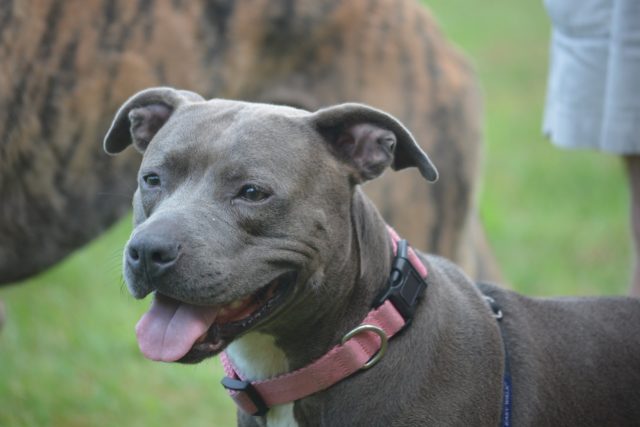 The Lion King is a story that has been part of everyone’s childhood. It’s a movie that continues to be passed on to the next generations. It is a timeless classic. The generation that grew up with this Disney classic has watched the film over and over again, that’s for sure.

But admit it: you could not hold back your tears when watching the scene in The Lion King where Mufasa dies. It is a truly heartbreaking, iconic moment.

So we totally understand Luna the pit bull’s reaction to the film. When Mufasa’s death scene took place, Luna stopped with her playing and watched intently.

According to Luna’s owners, Josh Myers and Hannah Huddleston, Luna was part of a stray pit bull’s litter of puppies. Luna’s mother was rescued from the streets. She was lucky enough to be put into a foster home immediately. Luna has eleven other siblings.

Time to go to my forever home!! I was a little nervous at first, I had never even been outside before! Drive slow, dad. You have precious cargo now 😊 #luna #lunaophelia #pitbull #pitbullpuppies #boxersofinstagram #boxerpuppy #rescue #adoptdontshop

It Started During The Car Ride Home

It was the Humane Educational Society that put up an Instagram account for the puppies and the mother dog to be adopted. Fortunately, Luna’s had enough traction to reach the young couple, Myers and Huddleston.

Luna then began being part of the couple’s life. It all started during their car ride home. Luna was wrapped around Huddleston for so long because of nervousness. After a few weeks, Luna had accustomed herself to her new home.

One day, the family was watching the classic Disney movie The Lion King. Luna was also in the living room, playing with her toys. Luna seemed to be very focused on her playtime.

This was my first ever photo thanks to Blake, my foster mom. I was born on October 24,2018. My parents met me for the first time when I was just 5weeks old and we just fell in love. They brought me home when I was big enough to leave my momma, Melon. 🐶 ❤️

However, when the scene of Mufasa’s death was playing on the screen, Luna paused and watched the film intently.

Luna even let out a soft whimper as Simba cried on-screen, and laid herself down when Simba did.

Watch the adorable video below!

“Anything you feel, I can feel too.” 🐾So Hannah and I were watching the Lion King while Luna played wildly with her toys. But right as Mufasa falls to his death, she stops and turns to the TV to watch. To see her crying at the TV was the sweetest thing I think I’ve ever seen. She even lays down right after Simba lays with his dad….We don’t deserve dogs. 💚 4 months old and she’s already showing empathy. I can’t wait to see how she reacts to the new live action Lion King!*VOLUME 🆙*Follow Luna on Instagram! @luna_o_thepitbullFor licensing or usage, contact: licensing@viralhog.com ViralHog

We thank The Dodo for the story and Josh Myers and Hannah Huddleston for the photos and video via Facebook.

This pug somehow managed to lock his mom out of the car. Find out what happened next.