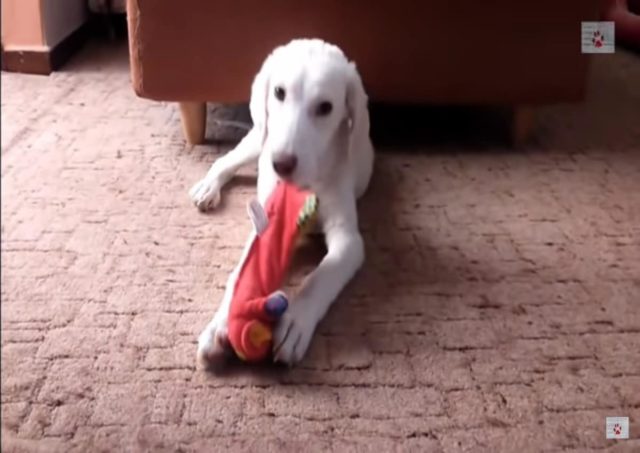 Petri is a homeless 3-month-old puppy found on a mountainside near a bustling Athens suburb. Unfortunately, Petri’s mother is also a stray who left him alone to fend for himself.

Petri tried to live day-by-day in the streets. But life in the outside world was just too difficult for the little puppy. Since Petri had not had any human interaction, he felt so frightened of his rescuers.

The rescuers experienced difficulty in capturing Petri because he was so evasive of everyone who came near him. However, after many attempts of trying to get Petri, the rescuers finally caught the terrified puppy.

Petri Was In A Terrible Condition

When the SPAZ Greece volunteers who worked hard to rescue Petri arrived at the hospital, the doctors discovered how pitiful the puppy’s condition was.

Aside from contracting mange, which made Petri lose his fur, his skin was also pink, swollen, and covered with blisters and scabs. The doctors gave him the nickname, “stone puppy.”

Petri also suffered from malnutrition and Ehrlichia. This gave him a fever and lowered his blood cell count. Petri’s survival seemed bleak. However, the SPAZ Greece volunteers and doctors did their best to give the dog the medical care he needed.

Fortunately, after Petri spent one whole month in the hospital, his physical wounds healed miraculously.

However, little Petri’s emotional and psychological wounds had yet to heal. He remained the sad, fearful dog that he was when he first arrived at the hospital.

A month after his road to recovery at the clinic, Petri left for his foster home. Petri’s foster mom brought him his own open crate, which served as the dog’s bed in her home.

Petri’s foster mom placed his food and water outside the crate, so that little Petri would have no choice but to get out to eat. Soon enough, Petri slowly began exploring his new environment.

The dog’s foster mom did not bother or force Petri to be sociable. She waited for a month until Petri was ready.

Her efforts paid off, because Petri is now a happy puppy who loves to interact with everyone around him.