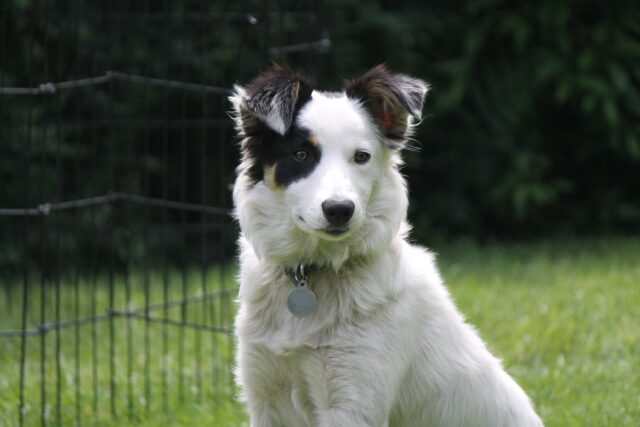 It was daylight hours in a very quiet part of the Canadian capital city and there was hardly anybody around.

All of a sudden, Haley collapsed into a heap on the ground. Poor Haley had just had a sudden seizure. When she woke up, she was in an ambulance, bewildered and confused. Haley didn’t know what had happened.

But across the street, a neighbor’s security camera had captured the whole incident. When Haley’s neighbor showed her the CCTV footage, she couldn’t believe it. The faithful family dog, Clover, had been a true heroine.

When Haley first had the seizure, Clover was understandably in distress. She tried to wake her owner, but to no avail. Then a passing car seemed to give Clover an idea.

Whilst Haley was unconscious on a neighbor’s driveway, Clover purposely went into the street to try to stop any oncoming traffic. Fortunately, it wasn’t long before Clover’s plan worked.

Clover Stops Truck In The Street

A white truck, driven by local resident, Dryden Oatway, was forced to stop in the street by clever Clover. Clover had backed into the road to block the truck.

Dryden saw Haley’s body slumped on the driveway and immediately got out of his truck to help. Unable to wake Haley himself, Dryden then called 911 to request an ambulance.

When shown CCTV footage of the incident, veterinarian Dr. Jeff Werburgh exclaimed that it was “really fascinating to watch”. Dr. Werburgh went on to explain that Clover’s natural canine instincts definitely played a major role in her behavior.

He also went on to say that when a dog is stressed and anxious, that they have obviously learned over time that getting help may be the answer.

Haley said that she was very grateful for Clover saving her life.

Source: Many thanks to our friends at littlethings.com for this fantastic story

Grieving pet owners are helped by this artistic dog lover. Read our story to find out what she does

A loving family dog’s tail stopped working. But what caused it?

This shelter dog with a crooked smile was overlooked for months. Mosley finally gets his forever home!

A stray pitbull kept running to the trails. Find out what rescuers had to do so they could rescue him