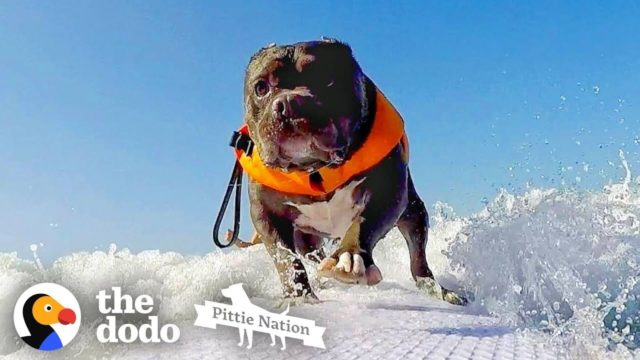 Having bad past experiences shouldn’t stop you from becoming happy in the moment. This premise is proven by one amazing pit bull named Breakfast. He’s a rescue dog. Once used and abused, but is now living happily with his new owner.

Liz Takes A Chance On Breakfast

Breakfast is now with a lovely lady named Liz. This pit bull had a history of being adopted several times but only to be brought back multiple times as well. Breakfast had been a foster dog for a long time until Liz came along and took a chance on him.

Breakfast’s cropped ears make for an intimidating look. Also, since he had no proper training during puppyhood, he has a few behavioral issues. On top of that, he is also a deaf pup. These reasons didn’t stop Liz from adopting this adorable dog.

Liz already had experience of training deaf dogs. She used sign language as the main method for issuing commands. Fortunately, Breakfast already knew some sign language before Liz got him. All she had to do was gradually build trust between them.

A Shared Love Of Surfing

Together they found a hobby that they both enjoyed. It was surfing. Breakfast wasn’t good at first, but the more they practised, the more confident he got.

It’s obvious in the video, how much fun Breakfast is having. Despite being deaf, this doesn’t stop the two from getting the most out of their days surfing.

Breakfast has a cute habit of making noises that his owner describes as “hippo” noises. He only does it when he is feeling happy.

In the video, you can see how he makes such cute sounds. Liz even describes the sound as similar to what a grumpy old man makes.

Breakfast is such a happy dog. He gets the attention of a lot of people when Liz takes him out for a walk. These two are genuinely excellent together. Good for them.

Feast your eyes on this! Dubbed “The World’s Greatest Dog Show”, read all about Crufts 2020 At The NEC Birmingham

Surf’s up at the beautiful dog beach in Huntington, where your dog is free to roam and play off-leash!

Have you ever been to Ocean Beach Dog Beach in San Diego? If not, you and your pup are in for a treat! Our article contains loads of info about this wonderful off-leash dog beach