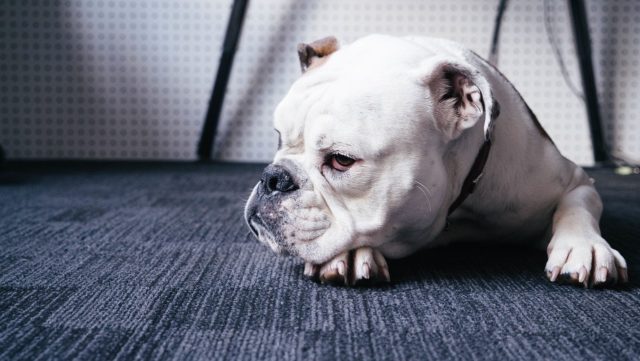 Dogs could be fearful of just about anything. But the most common forms of canine fear – such as fear of thunderstorms, fireworks, and even people, often translate into anxiety.

While canine anxiety may not be a serious issue on its own, it could significantly affect a dog’s behavior. An anxious dog could become aloof or aggressive over time.

Lilly Was Left To Die In A Trash Can

Lilly, a four-year-old bulldog, was one of those little pups who was left to die in a trash can. Fortunately, she was found and adopted just in time by kind and loving foster parents.

Lilly was only five weeks old then, but her fears and distrust may have been haunting her ever since she was abandoned in the trash with the rest of her littermates.

She may have grown into a big and muscular bulldog, but she had grown to be the emotional type – shy and sensitive.

Lilly’s foster mom knows all too well how cautious and skittish her dog is. In fact, she may have gotten worried about her baby’s emotional state at one point.

Her dog is not the social type, and Lilly remained aloof and reserved until her mom discovered something about her.

Whenever Lilly is dressed up as a turtle, she magically transforms into a jolly and friendly dog – the very opposite of her default personality. You may think that we’re making this up, but we’re not.

Play the video below and see for yourself how Lilly, the shy dog, transforms into her alter ego:

Lilly may be the reserved kind, but with the turtle costume, she seems to feel secure and comfortable. Good for you, Lilly!

Only one dog was left after a successful adoption drive