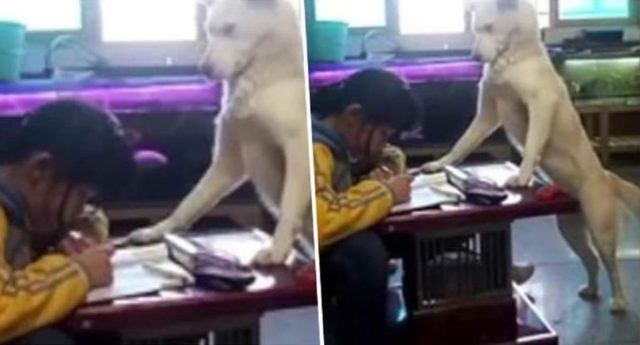 Dog Helps Girl With Her Homework

Dogs are going beyond being more than man’s best friend. This was proven when one dad trained the family dog to supervise his daughter while she was doing her homework.

Even Chinese teenagers are no exception to this weakness of getting distracted by gadgets, especially mobile phones, while doing other tasks. Almost everyone is guilty of doing that, and some are even perennially guilty of doing it.

The story happened in the province of Guizhou, in the south-west of China. This Chinese dad has found a way to deter his daughter from falling into the habit of getting distracted by a gadget, especially while studying.

He trained the dog to keep watch over his daughter while she is at her desk doing her homework.

The father, who is named Xu, said that they adopted the dog, called Riceball, in December 2016. Riceball has practically grown up with their daughter. So the girl loves the dog and respects her.

On the other hand, Riceball is a well-behaved dog that the father has trained and she does whatever he tells her.

After Studying, They Relax And Play

Xu tells Riceball to keep watch over his daughter while studying and not to let her reach for her phone. The doggie would perch himself on the table by putting his two front legs on top of the table. He looks stern enough.

The girl is also seen to be quite serious in her studies. After the studying session, they would relax and play.

Dogs’ role in human lives is evolving and going beyond being the usual guard dogs. Dogs are naturally intelligent creatures. They can be trained to do many other tasks that their human owners want them to do.

Some have been able to learn specialized skills such as carrying things, nanny-ing for kids, etc. which used to be done only by humans. Lately, there is even an environmentally-minded dog that gathers trash!

Dogs’ capacity to learn can be quite limitless.

Take a look at the video below to see Riceball supervising the girl.