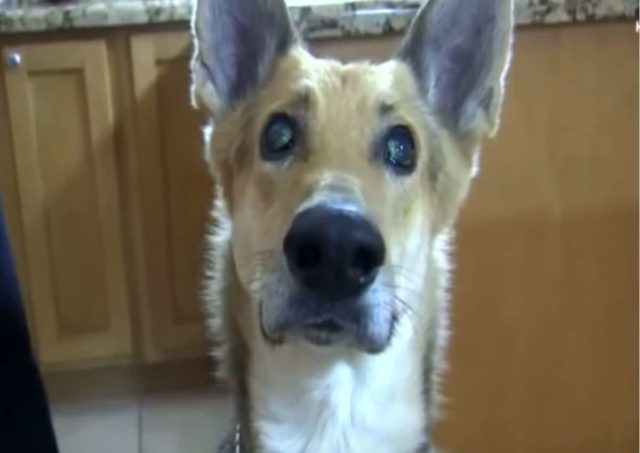 Just when this German Shepherd thought that all hope was lost because all his fellow shelter dogs had been adopted, the world certainly proved him wrong.

Bryan first arrived at the Arizona Humane Society in Phoenix as a blind 5-year-old severely malnourished dog. Bryan had a heartbreaking backstory. He was abandoned in his previous owner’s backyard, where he stayed alone and starved.

The Shelter Arranges An Adoption Event

Over the Thanksgiving weekend, the shelter arranged an adoption event. They hoped to find a loving and permanent home for the homeless animals they cared for.

At the end of the event, 313 out of 314 pets had been successfully adopted. Only one dog remained. Bryan was, unfortunately, the only one left unadopted.

Because of Bryan’s partial blindness, the staff figured that it might take a lot longer for him to get adopted.

Regardless of slim chances of him being taken into a nurturing home, they did not lose hope and continued praying that someone would consider bringing him home with them.

And thankfully, the universe heard their prayers, because someone did!

Patti Mooers had owned a German Shepherd for a long time. While others often look past animals with disabilities, disabled dogs always seemed to have a special place in her heart.

And Patti proudly shares how she and her husband have taken care of quite a handful of impaired dogs themselves.

When Mooers came across the #314 picture of Bryan, she knew she had to meet him. Odds were in Bryan’s favor, because he was taken home right after.

A Fairytale End To The Story!

At the moment, the Mooers family happily shares how seemingly contented the new member of their family is, and how he freely runs around in an acre of land without anyone stopping him.

So the blind German Shepherd finally gets adopted – what a fairytale end to the story!

This lady in Turkey puts a stray dog’s comfort before her own. Click here to see what she does

A gorgeous new-born puppy is given CPR by her owner. Her mom nervously looks on. Does the puppy make it?

Watch this family dog sleeping with a cute toddler

This dog is stuck on a roof. Watch what happens next