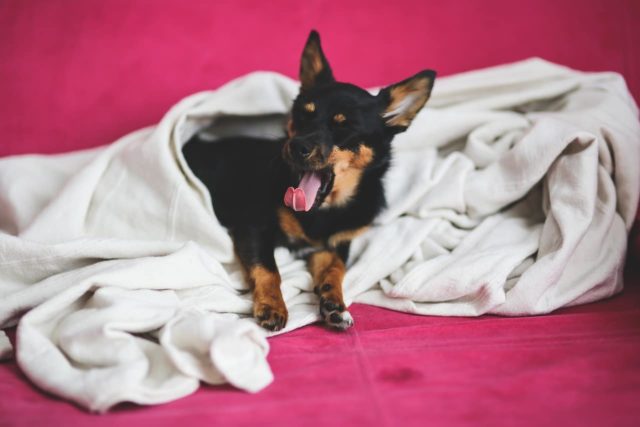 A stranger has just proven that no act of kindness is ever too small. And what makes it more special is when such an action is done when they think no one is around.

It surely warms the heart and restores our faith in humanity.

A Simple Yet Moving Act Of Charity

A simple yet moving act of charity warmed the hearts of people in Zonguldak, Turkey, amidst its rainy and cold weather. A woman emerged from a coffee shop and was about to do her errands, when she saw the curled up dog on the street.

The stray white pup was shivering and had just found a place to protect himself from the intensely cold rain.

The woman was definitely concerned about the dog’s welfare, and it took her some time to think of a way to help the needy pooch. We, too, might be willing to make sacrifices, but circumstances might not always allow us.

Lady Puts Dog’s Comfort Before Her Own

The lady must have considered some options until she settled on doing something easy yet profound.

She took off her own scarf, folded it in half, and lovingly draped it over the poor dog. The stray could be seen snuggling over his new and comfy blanket.

The woman will likely need the scarf to get through the chilly weather, but clearly, her love for animals won over her need for comfort.

Luckily, a camera caught the compassionate gesture and soon became viral. It even made headlines, and everyone wanted to know the stranger behind the selfless act. A friend eventually identified the kind stranger as Duygu Elma.

Elma was surprised with the attention her simple act has been getting. She said that she had no other option but to help the dog during that time, so she did her best to provide him with a little warmth and comfort.

Unassuming Acts Can Be A Catalyst For Change

She has not seen the pooch since, but she is hoping that others would be inspired to show kindness to animals whenever there is an opportunity.

So a complete stranger gives her own scarf to a shivering stray pup.

You can watch the heartwarming video here and be inspired to do good whenever you can.

Unassuming acts can really be a catalyst for change. We love you, Elma. You are our kind of hero!

Watch this family dog sleeping with a cute toddler

Bryan is a partially blind German Shepherd. Read what happened to him here

This dog is stuck on a roof. Watch what happens next

A gorgeous new-born puppy is given CPR by her owner. Her mom nervously looks on. Does the puppy make it?

An owner of a nightclub closed his shop, in order to help stray dogs. What a hero!

A tough guy falls in love with a chihuahua, after the dog helped him cope with depression