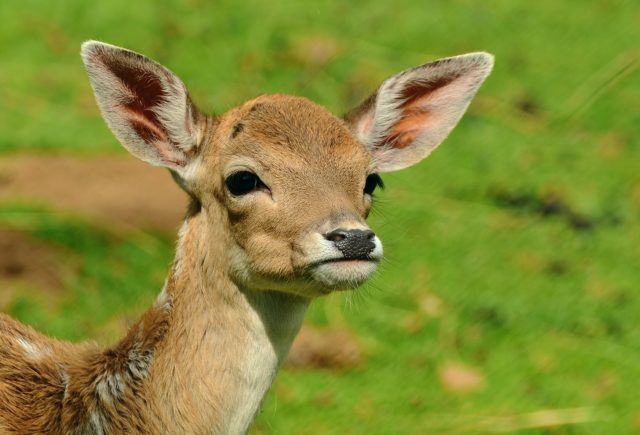 Baby Fawn Had Been Abandoned

Deer that are born in the wild are usually very elusive creatures. They would do anything to stay away from creatures other than their own.

The poor fawn had been abandoned by its mother. According to Isobel, a herd of deer reached their neighborhood, only to be chased away by the neighbor’s dogs.

Out of fear and desperation, the deer, including the fawn’s mother, bolted far away from the place, leaving the defenseless fawn behind.

The poor fawn cried for hours and hours – hoping that her mom would return. For Isobel’s family, it was a heartbreaking scene.

Fawn Was Dying On Front Porch

The family’s dog, Kate, a Great Dane, must have felt the same thing, because after several hours of enduring the desperate fawn’s cry for help, the dog finally stepped in to rescue it.

The fawn was dying on their front porch.

When Kate brought the fawn to the backyard, Isobel, at that time, had no choice but to care for the poor thing. The family soon named the fawn Pippin. But Kate’s and Isobel’s efforts weren’t for nothing.

As the fawn grew bigger and stronger, she learned to love her rescuer – Kate. Ever since Kate rescued her, the duo have become good friends.

Pippin may still be spending most of her time in the forest, but she regularly visits Kate to play and to bond with each other. Here is a video of the duo when Pippin was still very young:

And here’s another video of the pair several months later:

Kate And Pippin’s Legacy Lives On

Unfortunately, Kate passed away in 2014. But the duo’s legacy lives on. Kate and Pippin’s story reminds us that friendship may transcend even beyond species.

Chase was a star in his own right – he was Britain’s ugliest dog. Sadly, he has recently gone over the Rainbow Bridge

Brutus is a rescue dog with a sad past. But he saved the life of a little boy called Jason. Find out what Brutus did here

A hotel in Mississippi serves as a foster home for dogs. Read all about the hotel here