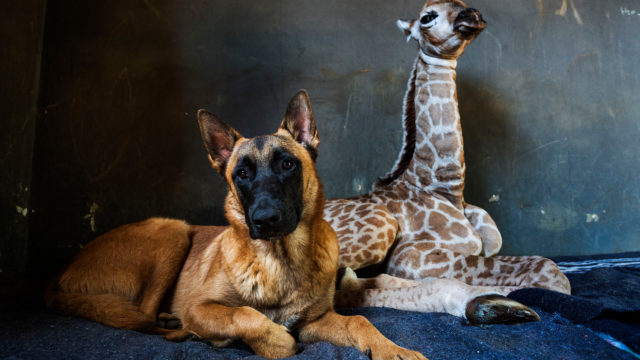 Dogs are generally very protective over those they care for and will do anything to protect their loved ones. Often, those loved ones are their humans or other dogs.

This story, however, is a story of a dog who made an unusual bond with a baby giraffe.

Hunter, a Belgian Malinois, found a friend in Jazz, an abandoned baby giraffe. Jazz was rescued after his mother left him after birth. Right after the rescue, Hunter fell in love with the little giraffe and has then since looked after Jazz.

The baby giraffe was found in a terrible condition — weak and dehydrated. Jazz would have died if the farmer did not see him. The farmer called the Rhino Orphanage in Limpopo, South Africa, and they came to rescue the poor animal at once.

Jazz Gets Taken Into The Rhino Orphanage

Jazz was not in very good shape when he first reached The Rhino Orphanage. The poor giraffe was unconscious for eighteen hours. His eyes had a blood pooling towards the front chamber, which caused an unusually red tint on the giraffe’s eyes.

His eyes have been treated, and he is getting better each day. Thanks to the wonderful staff at The Rhino Orphanage, Jazz was healing faster.

The giraffe was also very lucky that he had a very special dog to help him through the entire recovery. Hunter the dog was very protective of Jazz.

Jazz Gets Stronger Day By Day

Hunter served as a security and anti-poaching dog for the orphanage. The loyal dog stayed by Jazz’s side all day for support as the baby giraffe healed.

When Jazz first came to the orphanage, he was barely able to move. Now he is stronger and healing, but Hunter still keeps a close watch on him.

It does not matter whether you are a human or an animal; we all need someone by our side during tough times. Hunter did not fail to be that someone for Jazz in his time of need.

Poor Murray the dog is abandoned on a beach. Read what happens to him here