This is a story all about a tough guy that falls in love with a chihuahua!

Bobby Humphreys is one tough guy, and he never could imagine living with a tiny dog. But while he was at the pits of depression, he found himself leaning on one.

The Big Guy Who Felt Small

Bobby isn’t what you call a softie. He had rottweilers for pets; he works with hardwood flooring and lifts weights at the gym in his free time. Everything was perfect until his wife of 17 years decided to divorce him.

A week after the divorce, his shoulder got injured while working out. Everything just seems to be falling apart, and Bobby felt alone, miserable, and depressed.

It was hard for Bobby to deal with the changes in his life. The depression led to over-drinking. Fortunately, his friend, Constance, called with an unexpected request: look after Lady, her chihuahua.

If Bobby had had a choice, he would have said no. But Constance was one of the people who helped him through his darkest days, and looking after Lady was just a small favor.

As it turns out, Lady was just the distraction he needed. While he was pet-sitting the little dog, he discovered that Lady is one sweet tiny pooch with an incredibly huge heart.

But above all else, Lady taught him how to regain his dignity and self-respect. Bobby learned to love himself again. It surprised him how such a small dog could have such a massive impact on his life.

But Lady was only with him for a limited time, and soon enough, Constance came back to fetch the small dog. Bobby found himself looking at other chihuahuas he might be able to call his own.

That’s when he met Kira. And then he got siblings Harley and Quinn. These chihuahuas were in bad shape when he got them, but Bobby did everything he could to make them well and healthy again.

It seemed like Bobby found a new calling in saving the chihuahuas. He would rescue every single abused, neglected, and abandoned chihuahua he came across.

So a tough guy falls in love with a chihuahua and as a result, he set up Big Guy, Little World. Bobby has saved over 30 tiny chihuahuas through this organization.

Bobby may have been broken, but loving those tiny chihuahuas filled a hole in his heart. He couldn’t imagine how he would be today if he hadn’t met Lady and all the other pups he adopted. Those dogs gave him a helping paw when he needed it the most.

Is your dog a clever clogs?! Here are 7 signs to know if your dog is smart

Read this amazing story about a stray dog that ends up being adopted after joining a 155-mile extreme marathon!

Hunter VanBrocklin is a kid with cerebral palsy. Find out about the amazing bond that Hunter has with Wendy the Great Dane 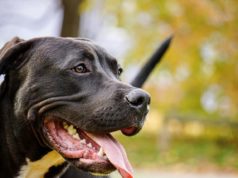 Marmaduke Got Reunited With His Owner After Hurricane Disaster