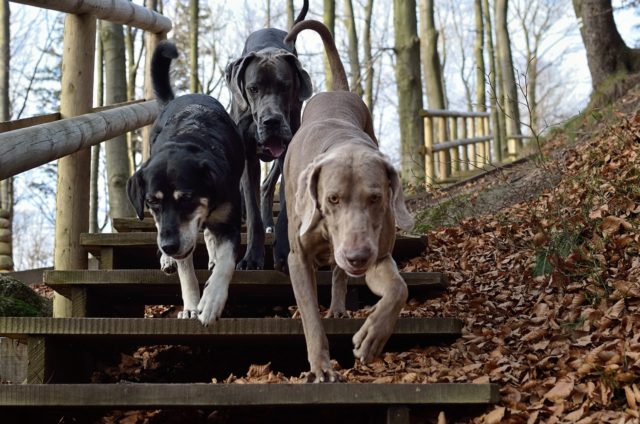 This is a fabulous story about some dogs that await at the hospital door while their homeless owner gets treated. Read on for the full story…

A Sunday Morning That Cris Mamprim Will Never Forget

Cris Mamprim works as a nurse at the Hospital Regional Alto Vale in Brazil. She thought it was just going to be a regular Sunday shift. But it turned out to be an early morning that she would never forget.

It was around 3 in the morning when Cesar, a homeless man, came to the hospital seeking treatment for his pre-existing medical condition. He’s normally attended to at another facility, so the hospital’s staff needed to ask for his information.

As Cesar was getting treated, the staff noticed that he had a few friends eagerly waiting for him right at the hospital’s door. Those friends were none other than his four furry companions.

Cesar Would Even Forgo His Own Food

Mamprim then learned that those were stray dogs that Cesar decided to care for. She also learned that at times, Cesar would even forgo his own food, just to make sure that his furry friends were well fed.

The dogs looked better fed compared to other stray animals, according to Mamprim. She also said that the fact that those dogs patiently waited at the door only shows that they were very much loved and cared for.

The dogs did not have to wait long, though. The staff soon decided to invite the dogs inside the hospital so they would no longer need to be apart. They also offered Cesar some food, which he shared with his four beloved dogs.

An hour later, Cesar got discharged from the hospital. Mamprim watched as Cesar and his pack of happy dogs wagged their tails away from the hospital, disappearing into the darkness of that early Sunday morning.

Cesar may not have many material possessions with him, but he surely has a life filled with love and friendship. His love for these animals is not just admirable, but is also respectable.

So that’s the truly wonderful story of some dogs that await at the hospital door while their homeless owner, Cesar, gets treated. We hope that you enjoyed the story!

Would you like to make your dog happier? Of course you would! Here are 17 easy ways to do just that

Find out here what Stella the dog received that made her go crazy!

Ever wanted to help your dog gain weight? Here’s how to do it in a safe way

Disney’s “The Lion King” is a great movie. Find out how Luna the pit bull reacts to the movie

A stray dog joins 155-mile extreme marathon. Find out what happens to her along the way