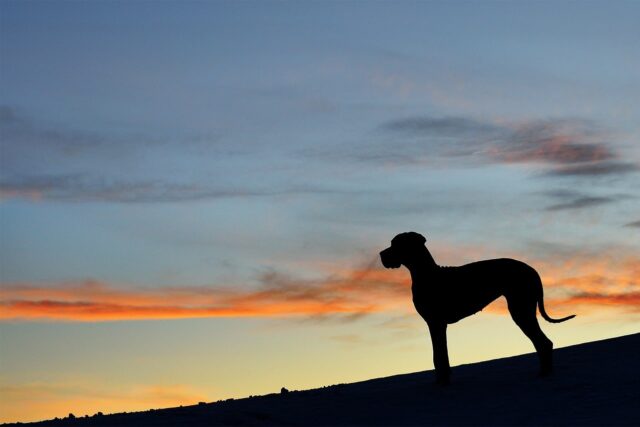 This is a heart-warming dog story of how a Great Dane, thought to be lost, had actually followed his owner to the local hospital. Read on for the full story.

Jeffrey Groat from Coeur d’Alene, Idaho, was sitting in his home, when something terrible happened. A suspected drunk driver suddenly crashed into the wall of Jeffrey’s house.

The crash caused injuries to Jeffrey, Jeffrey’s daughter, and one of Jeffrey’s friends. All the injured were hurried to a local hospital.

At the time of the accident, Jeffrey’s dog, named Burke, fled the house through a hole in the wall that was created by the crash. The young Great Dane was nowhere to be found after that.

While Jeffrey was recovering from a broken collarbone in the hospital, he never stopped asking about Burke. He was very worried about his missing dog.

The accident was reported by most of the local news outlets, and the missing Great Dane was also mentioned.

On the day of the accident, a passerby had noticed a Great Dane sitting near the emergency entrance of the local hospital. The good Samaritan brought the Great Dane to his home.

Later, when he saw the news about the accident, he recognized Burke’s photo. The kind man immediately contacted one of Jeffrey’s family friends, Brandi Bieber.

It is believed that Burke had followed his injured owner after the accident and ended up at the entrance of the hospital. The hospital was situated at a distance of only one mile from Jeffrey’s house.

Bieber picked up Burke from the unnamed good Samaritan’s house and started planning the dog’s surprise reunion with Jeffrey.

Later that day, a nurse told Jeffrey that he needed to come out of the hospital to get some fresh air. When Jeffrey stepped outside, he found Burke standing there.

Burke had to be stopped from jumping at Jeffrey, as the Great Dane was hyper-excited to see his owner again.

Jeffrey told Brandi that he was thrilled to see Burke again.

Brandi told her good friend Jeffrey how Burke, the clever Great Dane, who was thought to be lost, had actually followed his owner to the local hospital.

What a wonderful dog story!

Other Similar Articles You May Enjoy