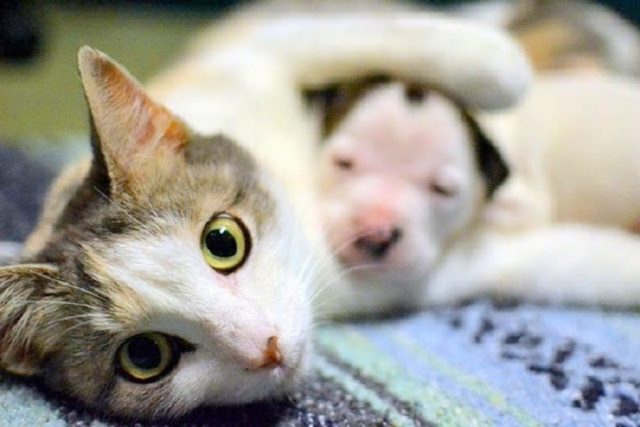 It is a fact that no one could ever replace the love of a mother for her children. And in the same way, a mother dog always makes sure her pups are well protected and loved.

A baby pitbull was parentless and struggling, and thus the staff of a shelter home tried something unusual. They put him next to a cat who had just delivered cute kittens and wished to have a positive result.

Noland, who was a tiny Pit Bull puppy, was found dumped at birth and just about clinging on to life. Luckily, he was rescued by the Animal Protective League of Cleveland.

The staff of the animal shelter observed he was in a very bad condition and even expected that he may not survive much longer.

Left with no choice, they did something eccentric. Two days earlier, Lurlene, a mother cat, had given birth to four lovely kittens.

Noland Grows Up Into A Joyful Puppy

So, the workers decided to put Noland beside the cat and her newborn kittens and hoped it would work. To their surprise, the plan did work.

The mother cat accepted him without reluctance. Lurlene would take good care of him for a more extended period and attentively kept an eye during his feeding. She also allowed him to lay beside her kittens and was ready to defend him.

Because of the mother-like love of Lurlene, Noland did survive and began to grow up into a joyful puppy. It is a great experience to witness a touching story about how the maternal instinct of a cat was able to help a neglected puppy in his combat for survival.

It appears that Noland will likely grow up to be a kind-hearted brother to his kitten siblings. This motherly love knows no species of a specific type. It is an instinct inculcated into one’s senses to give immediate love and protection to a helpless living creature.

Here is a  video below that shows Lurlene’s initial reaction when she met Noland.

This very kind dog helps another animal up the stairs. Read our article to find out what animal he helped

This fur-mom surprises her dog with another animal. What kind of animal do you think it could be? Find out here

This is possibly the sweetest video you’ll ever see!

This dog and cat are true travel buddies and go on lots of adventures together. Find out what they get up to here