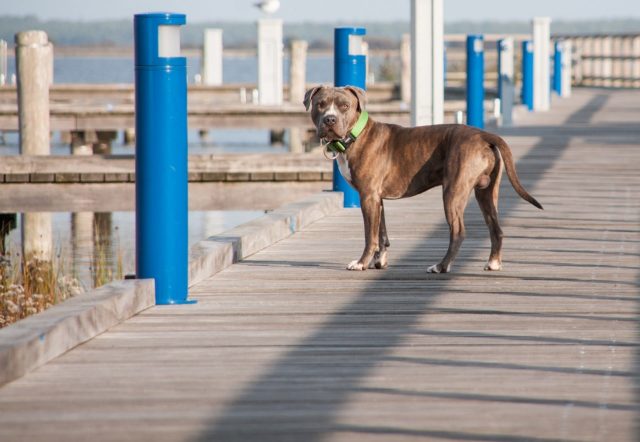 This amazing and heartwarming story is all about a pit bull that gets stuck on a roof and is very happy to get rescued.

Pit Bull Gets Stuck On A Roof

Sometimes we hear about news so weird, that it’s genuinely hard to believe. These amazing stories can’t really be proved unless we actually see a photo or even better, a video. This is precisely what a local Arizona animal rescue experienced.

Andy Gallo works as a rescuer for the Arizona Humane Society. He’s used to rescuing stray dogs and other animals out in the streets.

Andy would often get calls about stray dogs that need rescuing, but the most memorable call he got was about a certain pit bull.

Andy couldn’t believe what he heard over the phone when he got that specific call. The person on the other end of the line told Andy that there was a pit bull stuck on someone’s roof.

Pit Bull At Risk Of Dehydration

As you can probably imagine, Andy was in complete shock. It’s very rare to be told that a dog stuck on the roof needs rescuing.

As funny or outlandish as it may sound, Andy still realized the urgency of the situation. The unforgiving Arizona heat can quickly cause dehydration. And, a dog stuck on the roof makes the situation a lot worse.

The pit bull was stuck on the roof with no shade or protection. It was completely exposed to direct sunlight, which can dehydrate the animal and also cause overheating or heat stroke.

Andy Has To Act Quickly To Help The Dog

As soon as Andy was in the property, he saw the pit bull. The pit bull was very excited to see people and was continually yelping and wagging its tail. Andy knew that he had to act quickly and climbed up a fence to get to the roof.

The pit bull went to the edge of the roof, where Andy was and showed complete trust in Andy. The pit bull was very excited and started rolling over on the roof.

When Andy made it on top of the roof, the pit bull started showing its appreciation by jumping on Andy – so much so, that it nearly knocked him over.

Andy Brings The Dog Down Safely

Eventually, Andy and his partner were able to bring the dog down safely. As soon as Andy made it back down on the ground, the dog didn’t hesitate to show its appreciation.

Andy also found out that the dog didn’t live in the house where it had become stuck. It was actually a stray that had somehow made its way up to the roof.

Andy and his partner took the dog back to their trauma hospital. The pit bull made a great impression on the rest of the staff and volunteers at the shelter. The dog was later named Khan and was eventually put up for adoption.

A woman named Lindsey Clark saw Khan’s picture on the animal rescue website and thought that there was no way that Khan would still be at the shelter. Khan was charming, and anyone would want to adopt him.

However, Lindsey still called the shelter to ask about Khan, and she was so delighted to learn that Khan was still there. So, Lindsey went down to the shelter and immediately applied to adopt Khan.

Khan Loves To Play With His New Mom

Like most rescue dogs, Khan was a little timid when he first came to his forever home. After a few days, Khan got more accustomed to his new environment. He is now a very happy puppy who loves to play with his new mom.

So this fabulous and heartwarming story was all about Khan, a pit bull that got stuck on a roof and was very happy to get rescued!

Here’s an adorable video showing Khan’s rescue and his new and happy life with Lindsey.

Other Similar Articles You May Also Enjoy:

Read the story of Nitro, the pit bull with the sweetest smile…

Meet Breakfast, the rescued deaf pit bull, who has learnt to do something amazing!

A badly injured pit bull was hanging out near the railroad. Watch how his rescue went

Noland, a tiny pit bull puppy, was found dumped at birth. Find out what animal shelter staff did to help him survive. It’s probably not what you think!