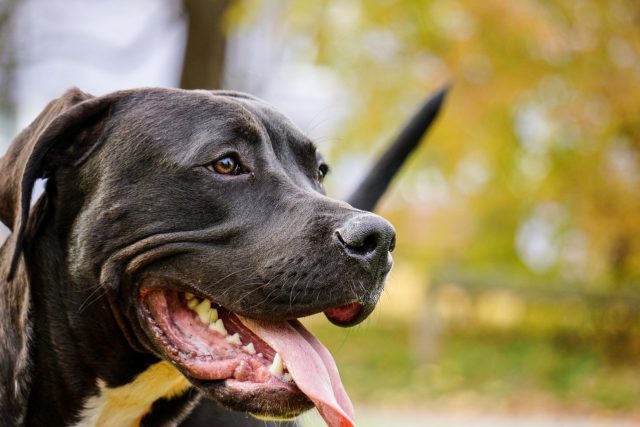 Liam was the twentieth dog that Daniela took in as a foster. At first, Daniela was hesitant to foster him because Liam had had two foster families. They kept bringing him back to the shelter.

Liam is a deaf pit bull, and Daniela had no idea how to take care of a deaf dog. She was very undecided in the beginning, but one of her friends encouraged her to try. Daniela ended up being Liam’s third foster mom.

Daniela brought Liam home. Liam hasn’t left Daniela’s home since. Daniela adopted him and he became part of the family. She could not let him go.

Daniela continued fostering puppies. Liam has become such a great foster brother to the puppies that Daniela takes in. Every time she brings a new dog into their home, Liam is ready to take on the role of guardian and mentor.

This deaf pitbull loves taking care of their foster puppies.

Liam has become particularly close with one puppy named Blaze. Blaze was two point five pounds. These two have become inseparable since day one. Blaze would follow everything that Liam does, which is incredibly adorable.

It was bittersweet when Blaze finally found his forever home two months later. Blaze’s parents decided on keeping his name.

That’s because he embodies it perfectly. Blaze is full of life, and he has a lot of energy. He loves to play and loves to explore. Blaze is enjoying his life with his new family.

Stories like Blaze’s life is what keeps Daniela going. That’s why she continues to foster because she gets to help a lot of puppies find their home.

Daniela has fostered more than ninety-five puppies and has no plans of stopping yet. Liam is the perfect assistant, so Daniela has nothing to worry about.

Daniela knows that this deaf pitbull absolutely loves taking care of their foster puppies. And he seems happy to continue doing so.

A baby pit bull was parentless and struggling. The staff of a shelter home tried something very unusual. Find out here what they did

A badly injured pit bull was hanging out near the railroad. Find out how his rescue went